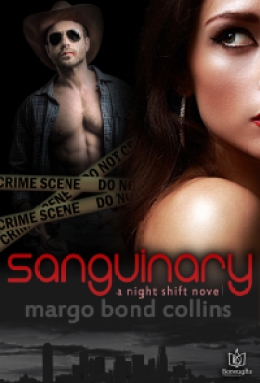 When Dallas police detective Cami Davis joined the city’s vampire unit, she planned to use the job as a stepping-stone to a better position in the department. She didn’t know then what she knows now: A silent war rages between humans and their supposedly pacified predators, and the vampires are winning. With the clock running out on her kind, Cami will do whatever she must to defeat the “Sanguinary.”

Enter Reese Fulton, a disaffected ex-cop and a vampire. She can’t exactly trust him, but with his cowboy boots and good-ole-boy drawl he’s the perfect beard for Cami’s fledgling undercover operation. Yet playing Reese’s Claimed—a vampire’s personal bloodgiver—isn’t as straightforward as she was led to believe. His bite is as enthralling as his dimpled smile, and soon Cami is wondering which will pose more of a challenge: subduing the enemies of humanity…or her own desire.

It hit me, hard, that no matter how I twisted it around in my head, Reese was going to be more than just an informant to me. I didn’t know if I could trust him, this cowboy-vampire I had been thrown together with. But something about him sang to me, like a tune just out of hearing, almost recognized—a song of protection and death. And I wanted to dance to it, almost as much as I wanted to escape it.

The department wouldn’t force me to stick it out, wouldn’t expect me to team up with a vampire for anything more than the most superficial of connections.

It helped to know I could walk out at any time.

But I also knew I wouldn’t.

I was certain that Reese would help us find and stop whoever was killing these women.

That’s why I’ll stay in this.

“I’ll tell you everything,” I said to the vampire snarling at me. “But I’ll need your help.”

Reese’s lip dropped back down, covering the fang.

I was glad—it was easier to contemplate joining forces with him when he wasn’t reminding me that he was one of the monsters.

I shook my head. “Not here.” I spoke quietly. How good his hearing might be was only one of the many things I didn’t know about vampires.

He slid up to the bar beside me.

“We can’t leave,” he replied, equally softly. I had to lean close to hear him.

“Mendoza all but dared me to Claim you, back there.” He didn’t look down at me. “If I don’t bleed you at least a little before we go, he’ll be suspicious.”

At his words, the half-healed bite mark Reese had left on my shoulder throbbed once, sending a hot pulse throughout my entire body.

I wanted the response to be revulsion.

Almost everyone who went undercover with the vamps came out addicted to their bite. The ones who could still string two sentences together, like Garrett, stayed on the force.

The press portrayed the police as bumbling and stupid—and maybe we were. Sending detectives in against humanity’s worst nightmare? We were like little kids trying to hold back the dark with matches, bound to get our fingers burned, and worse, maybe burn the house down around us.

Margo Bond Collins writes urban fantasy, contemporary romance, and paranormal mysteries. She lives in Texas with her daughter and several spoiled pets. Although writing fiction is her first love, she also teaches college-level English courses online. She enjoys reading romance and paranormal fiction of any genre and spends most of her free time daydreaming about heroes, monsters, cowboys, and villains, and the strong women who love them—and sometimes fight them.

Other authors participating in the tour: