The Only Woman in the Room: A Novel
by Marie Benedict
Audio Book Narrated by Suzanne Toren

I bought this audio book from Audible. It is based on the early life of film star Hedy Lamarr, but apparently loosely based, if the reviews at Amazon are correct.

Hedy Lamarr is something of a legend among screen stars, though most people don’t know much about her life. Coming to Hollywood in the late 1930s, she quickly realized that being known as a Jew would do her career no good, so she never talked much about her early life.

Born in Vienna to non-practicing Jews, Hedwig Kiesler was drawn to music and theater. When she was 17 or 18, she was cast in a scandalous movie called Ecstasy about a young woman married to an older man who has an affair, including nude scenes and simulated sex. The decision would come back to haunt her later.

The book starts with her appearance on the Vienna stage as their beloved Empress Elizabeth in the play Sissi. In the audience is her super fan, an older, successful man named Friedrich “Fritz” Mandl. He woos and wins her hand despite her and her parents concerns about his roguish reputation and scandalous occupation (arms merchant). Over time young Hedy realizes that Fritz is controlling and at times abusive. She is trapped in an untenable marriage.

Fritz does a lot of entertaining, sometimes social and sometimes business. During the business dinners, Hedy is “the only woman in the room” and the men spoke freely about their weapons projects and the difficulties they were facing. All of them think Hedy is just a pretty face, but she has a formidable intelligence. During the day, she reads the scientific and technical books in Fritz’s personal library, so she understands what they are talking about. When the political situation demands that Fritz embrace the Nazis, Hedy starts plotting her escape. She knows what Hitler is doing to Germany’s Jews. 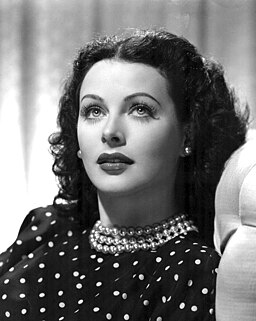 Hedy Lamarr publicity photo for the film The Heavenly Body, 1944, courtesy of Wikimedia.

She escapes in 1838 and goes to London where she finds a lawyer and files for divorce. She brought one set of jewelry, so she sells one piece to buy a ticket to the US on the SS Normandy. In London, she meets Louis B. Mayer and his wife, and he offers her a contract. The Hollywood years are less riveting thatn Hedy’s marriage to Fritz.

In Benedict’s book, Hedy is consumed by guilt for escaping from the Nazis without telling anyone what she knows and trying to warn Europe’s Jews to get out while they can. If they can.

After war breaks out, she starts thinking about the torpedo guidance problems the Germans are having. She has a vague idea of how to improve the guidance, but needs help. Then she meets avant-guarde composer George Antheil. In Paris, she had heard his Ballet Mecanique, which features countless player pianos. They start working together to come up with a way for the torpedoes to be guided by constantly changing radio signals. This was the beginning of spread spectrum technologies, which are used today in wi-fi and Bluetooth.

In 1941, Antheil and the actress Hedy Lamarr developed a radio guidance system for Allied torpedoes that used a code (stored on a punched paper tape) to synchronise random frequencies, referred to as frequency hopping, with a receiver and transmitter. This technique is now known as spread spectrum and is widely used in telecommunications. This work led to their being inducted into the National Inventors Hall of Fame in 2014.

The book ends shortly after the US Navy turns down Hedy and Geroge’s invention, presumably because she was a woman.

In the author’s note afterward, we learn that the Navy classified the patent Top Secret, and used it in the 1950s in sonobuoys.

I enjoyed the book, though the early part was more interesting, at least until the section about her and George developing their guidance system. That was interesting.

Hedy Lamarr is quite an enigma. She was beautiful and smart, a tough negotiator, and apparently a talented actress, yet her career was relatively short lived, flaming out in the 1960s. She went into seclusion in the 1970s and died in 2000.

Recommended for fans of historical fiction.

Happy Holidays to all!

As always, click on the graphic below for more great reviews in Barrie Summy’s Book Review Club.

8 thoughts on “The Only Woman in the Room: Book #review Club”

This site uses Akismet to reduce spam. Learn how your comment data is processed.